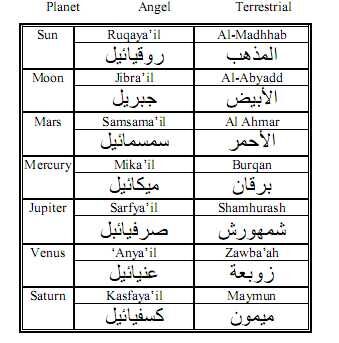 Magicians read in their books about these kings, whose names vary depending on the source. According to one version, they were: Mudhhib ("gilder"), Merra, al-Ahmar ("the red"), Borqan ("the gleaming"), Semhuresh, al-Abyad ("the white") and Mimun ("lucky").

Each of these jinn kings also has multiple aides or assistants from their tribes and many other offspring. As a matter of general principle, the kings should always be called under the auspices of angels. At no point should you call them forth to run any kind of errands. If you need their aid for something, always ask them to send someone to you from their tribe to assist you. This point of not asking the Kings directly has been emphasized repeatedly by many of masters in our tradition. While we are not going to reveal any techniques for summoning these jinn, you may choose to do so anyway. If so, keep in mind the following points:

a) when the kings arrive, you must ask them to enter into a pact of service to you; b) if you think you have managed to constrain them into a triangle of the art, then it isn’t the kings that are present; c) if there are no physical signs of manifestations that can’t be explained by your being in a trance, then your work isn’t finished; d) don’t be distracted by initial signs of physical manifestation into thinking your work is finished, e) if you see physical manifestation of Jinn, be careful lest this be a distraction by their aides; f) don’t summon them to prove their existence to yourself; g) don’t go into this thinking to rely on traditional generic banishing methods, as their magic is superior to anything we possess, so only by the grace of the Goddess and Her angels will you be protected; h) don’t ask them to do something against their nature, such as asking Meymoon to aid you in a love spell, for they will do it and then punish you.

Each of these is said to have many children and is called after the most prominent child. This is a common Arabic practice. If the eldest son of John is Tob, then they would call you John, Father of Tob. The word for father in Arabic is Abba and the name for son is ibn. Meymoon is known as Meymoon Abba Nuch, which means that his son is Nuch ibn Maymon. This is important to know since there are many jinn with the name Meymoon. So, when calling the jinn king of Saturn, we have to identify him specifically with his full title Maymon Abba Nuch.

Each of these jinn kings has many tribes of jinn subjects to his rule. All the above given names are Arabic -- except for Shamhurish, whose origin is unclear. Shamhurish is considered by some accounts to have been a jinn companion of the Prophet, and some believe he died long ago -- in the early eighteenth century -- and has been replaced by Mutawakkil. 'Abu Murrah' (Father of Bitterness) is a common alias for Iblis. 'Abu al-Harith' (Father of Plowman) is, for reasons lost in antiquity, an old Arabic term for African lion.

Al-Qarinah (sometimes called al-Tabi'ah) and Umm al-Subian are well-known demons whose names are also often found on talismans. Al-Ahmar is sometimes called Abu al-Tawabi', or father of the qarins, the male versions of al-Qarinah.

Four of the seven jinn kings qualified as 'archdemons', or leaders of infernal hosts: Mudhib, Maimun, Barqan and al-Ahmar. Each of the four archdemons had for his deputy an ifrit, an evil jinn more powerful than a run-of-the-mill shaitan or devil. Mudhib had the ifrit Damriat (or Tamriat), Maimun had Man'iq (or San'iq), Barqan had Wahdelbadj (or Wahdeliadj) and al-Ahmar had Sughal. None of these ifrits' names has appeared on a talisman, according to Palestinian folklorist Tewfik Canaan, who published important writings ont he translation of Arabic talismans in 1937-1938.

Community content is available under CC-BY-SA unless otherwise noted.
Advertisement